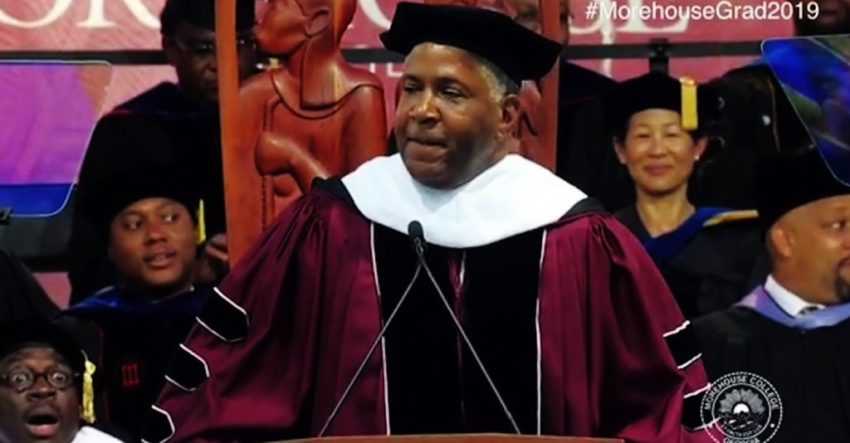 ATLANTA – Robert F. Smith’s gift of paying off the student loans of Morehouse College’s 2019 graduating class stunned the school’s students and faculty, but it was just the latest act of philanthropy by the quiet billionaire tech investment executive who is concerned that economic opportunities for African-Americans have narrowed.

“My family is going to create a grant to eliminate your student loans!” Smith told the graduates during his commencement address. “You great Morehouse men are bound only by the limits of your own conviction and creativity.”

Smith made the surprise announcement Sunday while giving the college’s commencement address. His gift is estimated at $40 million-plus.

Smith, 56, is the nation’s richest African-American – ahead of Oprah Winfrey–with a net worth of $5 billion, according to Forbes. He amassed his wealth as chief executive of Vista Equity Partners, a private equity firm in Austin, Texas, that he founded in 2000.

Vista Equity buys, grows and sells companies in the software and other technology fields. It manages $46 billion in investments with a portfolio of more than 50 companies that employ more than 60,000 people, according to the firm’s website.

His company is No. 1 on the BE100s (Black Enterprise magazine’s annual list of the most successful Black-owned companies) Private Equity list with $14 billion in capital under management. His company has been named to the BE 100s list for about a decade. Vista Equity Partners was BE’s 2013 Financial Services Company of the Year.

Smith seldom gives interviews and operated in relative obscurity until a few years ago. His profile began growing in step with his philanthropy, much of which is aimed at supporting the African-American community, and with more public appearances.

Speaking at the Milken Institute Global Conference in Beverly Hills, Calif., this month, Smith warned that educational and economic opportunities for African-Americans had narrowed since the time he and other Denver children were bused to recently desegregated schools in the area.

“There is only one of those folks that were on that bus that actually got incarcerated,” he said. “We have doctors. We have lawyers. We have politicians. We have investors – all because we had the opportunity to get into a great public school.

“That dynamic lived in my neighborhood. It doesn’t live in that neighborhood today as much as it did then. The economic opportunity that was afforded me, I think, has changed. It has shrunk.”

Smith said African-American communities are as segregated today as in the 1950s, subjecting them to “economic underdevelopment” that doesn’t allow them to fully participate in the economy.

He called for companies to invest in the problem, including by offering internships to underprivileged students who may not even be aware of the job opportunities created by the tech revolution.

Months before saying he’d wipe out the student loans of this year’s graduating class, Smith announced a $1.5 million gift to Morehouse. He also has donated $20 million to the Smithsonian’s National Museum of African-American History and Culture in Washington, and he and his foundation have given $50 million to Cornell University, his alma mater.

In 2016, Smith became the first African-American to be named the chairman of Carnegie Hall. He had served on the celebrated New York concert venue’s board and was a donor, and hall officials cited his passion for music and his desire to help underserved communities connect with the arts.

At a gala last fall for the City of Hope – the cancer hospital and research center in Duarte, Calif. – Smith was the largest individual donor, with a gift of $500,000 that was earmarked for prostate cancer treatment for Black men and breast cancer research for Black women.

Smith also signed on to the Giving Pledge, a commitment by the world’s wealthiest individuals and families to dedicate a majority of their wealth to philanthropy. The concept was formed by Bill and Melinda Gates and Warren Buffett.

The Colorado native also enjoys the fruits of his success. He owns a $59 million penthouse in Manhattan and a $19.5 million mansion in Malibu, Calif., among other properties, according to media reports.

Smith has five children, three from his first marriage and two with wife Hope Dworaczyk, a former Playboy model he married in 2015.

The son of two high school principals with doctorate degrees, Smith grew up in a mostly Black middle-class neighborhood. In a Washington Post interview, he recalled that his father made sure music filled the house and that as they went to bed, the recordings of African-American opera star Leontyne Price played on the stereo.

According to Black Enterprise, “Smith started his early life out as a computer geek and even interned at Bell Labs. Although he worked in the STEM (science, technology, engineering, and math) field for some time after earning a degree in chemical engineering from Cornell, the financial world beckoned.”

Smith earned a bachelor’s degree in chemical engineering from Cornell, followed by an MBA from Columbia Business School and a stint at Kraft General Foods. He switched to tech investment banking in 1994 when he joined Goldman Sachs, where he worked on mergers and acquisitions in Silicon Valley and elsewhere, then stepped out on his own and started Vista Equity.

As his success and wealth grew, Smith maintained a low profile and shied away from being photographed. But now he’s more comfortable with his public profile in part because he wants young African-Americans to see what he’s accomplishing, Smith told the Post.

“Now I want people to say, ‘If Robert Smith can do it, I can do that and more,’” he said. “I could just live off my money. It might be a good life, though it wouldn’t be a fulfilled life.”

According to Black Enterprise, at an event last year at the Oakland, Calif., home of business strategist Carl Hackney, Smith spoke with a gathering of mostly Black politicians, venture capitalists, tech entrepreneurs, and philanthropists. He weighed in on the importance of investing in communities and his advice for future generations.

“Think about what is it that you uniquely bring to a community that changes that community. Sometimes, it is words of inspiration. Most of the time it’s acts of inspiration. It is doing something, it is leading, it is taking advantage of what it is you have to provide.

“Sometimes what you have to provide is walking a child home every night so they feel safe. Sometimes it’s making sure a child is read to at night because their parent is at work. Sometimes it’s a scholarship. Sometimes it’s the encouragement to go dream big, go take the test, go try something different, go get an internship.

“Or it’s creating an internship, like the internship I got at Bell Labs when I was 17 years old, that allows them to stretch their imaginations,” he said.

Information from James F. Peltz and Laurence Darmiento of the Los Angeles Times/TNS and Samara Lynn, Caroline Clarke and Selena Hill of Black Enterprise was used to prepare this report.

This article originally appeared in the Florida Courier.