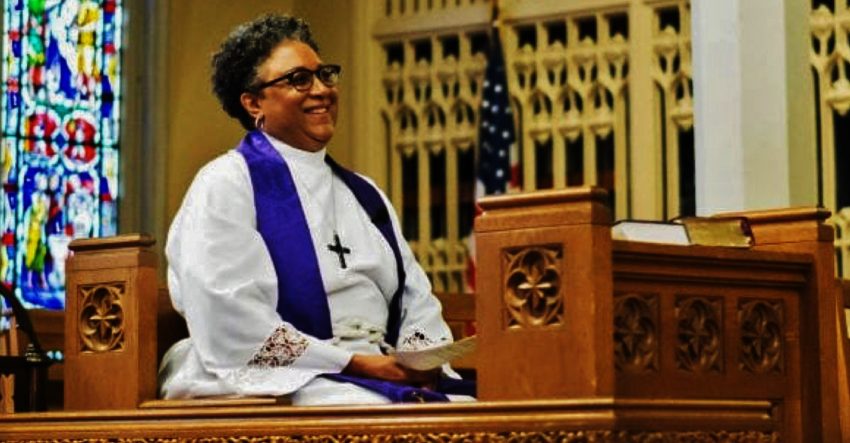 Editor’s note: Bishop-Elect Phoebe Roaf was in Knoxville in March. She was the guest speaker at a Celebration of The Blessed Absalom Jones that was at the Episcopal School of Knoxville and co-sponsored by St. Luke’s Episcopal Church in East Knoxville. For more information on Bishop Roaf, go to the MENU and select American History.

News Wire – “Now, let me get this straight. You are a successful attorney, making a good salary, and you are about to make partner, which will give you even more money,” Phoebe Roaf’s mother said. “But you want to leave all that, go to seminary for three years with no salary and pay $100,000 because you know it’s got to be paid for. That’s really what you want to do?”

“My mother was just being a mother,” said Roaf. “But I told her, “Yes, Mom, that’s just what I want to do. It makes me happy. The ministry will make me happy.’ After a while, my mother began to understand and support me in my position.”

Roaf’s life-changing direction culminated when Bishop-Elect Phoebe Roaf became the first female and the first African American elected to lead the Episcopal Diocese of West Tennessee. Her Consecration Service was Saturday, May 4th, at Hope Church.

“This is so exciting because I will be consecrated by my boss. Well, God is my boss, but my earthly boss is the Presiding Bishop of The Episcopal Church, The Most Rev. Michael B. Curry,” said Roaf. “You remember, he is the one who preached the sermon at the royal wedding of Prince Harry and Meghan Markle. Bishop Curry is the first African-American to hold the presiding bishop’s office.”

Curry told The New Tri-State Defender that the consecration of Roaf as Bishop of the Episcopal Diocese Of West Tennessee is “a cause for thanksgiving, celebration and hope.”

“To be sure, she and the people of West Tennessee are making history as she is the first woman as well as the first African American to hold such a position. But the real history-making moment is the hope,” Curry said. “She was not elected because she was a woman or African American, though we rightly give thanks for these gifts she brings.

“She was elected because she is a woman committed to Jesus of Nazareth and His way of love. And that way of love is the way of life for us all, black or white, Anglo or Latino, rich or poor, liberal or conservative, gay or straight, old or young. And that is a sign of hope for our country and our world. That’s history!”

At his own installation as the 27th presiding bishop and first African American to lead the 2.5 million-member denomination, Curry urged all Episcopalians to “join the Jesus movement.

He took office in November 2015 of the predominantly European organization at the Washington National Cathedral in the nation’s capital. He told the more than 2,500 congregants who witnessed the historic moment:

“The Holy Spirit has done evangelism and racial reconciliation before in the Episcopal Church. “God is not finished with this church. God has work for us to do. Jesus has shown us the way and we are the Jesus movement, so my brothers and sisters, walk together, children, don’t you get weary.”

Roaf expressed excitement about “just the great opportunity for ministry” in her new office.

“I just feel so excited and so hopeful about the opportunity to partner with others to present the Episcopal Church to those who would not have, otherwise, considered becoming a part of this denomination,” she said. “The Holy Spirit is blowing through the Episcopal Church in a brand-new way. And I really want people to just look beyond my race and gender and see my heart. I love Jesus Christ. He is my Lord and Savior. And I am ready to serve because I love Him and I love His people.”

The West Tennessee Diocese covers all Episcopalian churches west of the Tennessee River, with more than 8,200 active members. Roaf was chosen as the Fourth Bishop of West Tennessee in November 2018 by a vote of both clergy and lay delegates to the Annual Diocesan Convention.  She succeeds Bishop Don E. Johnson, who has served as Bishop since 2001.

Roaf earned a Bachelors degree in U.S. History from Harvard and a Masters degree in Public Affairs from Princeton. She went on to earn a law degree from the University of Arkansas, Little Rock and clerked for the U.S. Court of Appeals Fifth Circuit for two years. She worked in commercial real estate as an associate at a New Orleans law firm before pursuing a call to serve The Episcopal Church as clergy.

“I knew that law was not my true calling,” said Roaf. “It was not my passion. I had to ask myself, ‘What makes me excited and what makes me happy?’ It was ministry. When I was in the altar guild or teaching Sunday School, those were the things that filled me with so much joy and so much energy. I knew I was called to ministry 15 years before I actually went to seminary. Obeying God was the best thing I ever did in my life.”

Roaf attended Virginia Theological Seminary, graduating with a Masters in Divinity in 2008. She currently serves the seminary as Board of Trustees vice-chair. Roaf is the eldest of four, with one sister and two brothers. They were all at her Consecration on Saturday.

This article is by Dr. Sybil C. Mitchell, The New Tri-State Defender