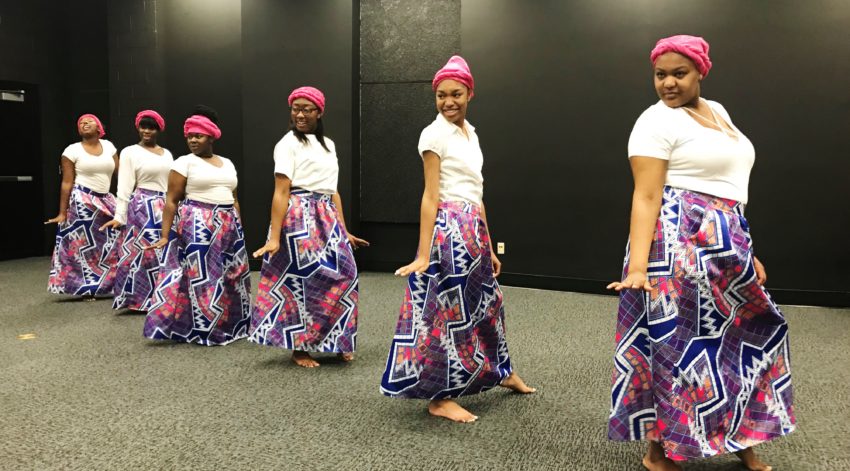 Students from Austin-East High School used the words of others to create an award-winning theatrical performance, but in the process, they found their own voice.

Under the category rules, the piece could not include original writing and instead was focused on historical and cultural material. Katherine Lundy, a senior and captain of the theater team, said the idea was to highlight the work of black women and said she discovered parts of history that she had never learned before.

“As a black, young woman I never realized that black women really had it rough before I got to where I was … I was in shock,” she said. “When we did the whole piece and everything was put together and we were reading through the script, I cried. I was like, ‘This is amazing because no one has ever taught me this stuff.’ We taught ourselves so we should teach others.”

The six students who performed “Black Girl Magic” — Lundy, Asia Chesney, C’Kara Winston, Keyira Hunt, Nevaeh Daniel, and Breshieyah Glenn — drew from a variety of sources, ranging from speeches by Michelle Obama to the poetry of Maya Angelou to the autobiography of fugitive slave Harriet Ann Jacobs, which was published in 1861.

On a recent afternoon, the girls rehearsed a portion of the drama in the “Black Box”, a room in the school that is being renovated as a small theater space. The walls have been painted and new carpet installed, but A-E students are trying to raise money to finish the project with a sound system, lighting, and a stage.

“Black Girl Magic” and other pieces were part of performances that were free at the venue on Wednesday, April 17, at 7 p.m. The performance included two other state-winning pieces: a humorous act in which Kellen Brabson plays 10 characters in 10 minutes and a pantomime from Edward Shuler.

Theater teacher Doug James, who helped coordinate the performance, said he wanted students to find their voice. “I said, ‘If you’re going to the state competition, what do you want people to understand about you?’ And this is the piece that they put together.”

In learning about other women, sophomore Asia Chesney said she was inspired to overcome her own obstacles.

On the night before the state competition, the group reworked much of the performance, including the beginning and the end. But as the only team of black students, Lundy and Chesney said it also took courage to let the stories of African-American women be heard and not worry about the reaction.

And where did that courage come from? “I guess all I can say is Black Girl Magic,” Lundy said with a laugh.

Josh Flory is a multi-media specialist with Knox County Schools and produces the blog, Hall Pass, for the KCS website.