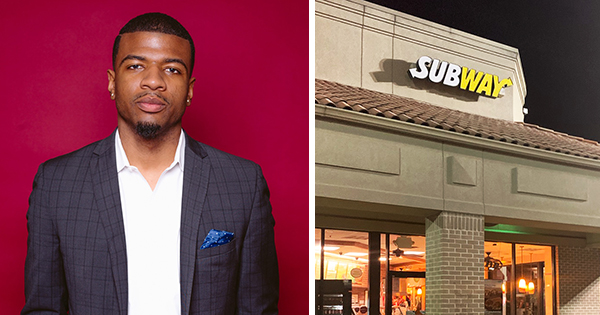 Chris Williams II is a young entrepreneur originally from Chicago that has just officially acquired his own Subway franchise, making him currently the youngest Black person to do so in the city of Atlanta. The grand opening is in July 2019.

How he got started

Chris, who was once homeless, started off as a car salesman at a local dealership in Arizona. After 2 years of saving up his money, he was able to pay for the tuition needed to attend the Automotive Dealership Institute in Phoenix. After completing 4 weeks of training, he then started pursuing career opportunities to become a finance manager.

After searching and searching, he finally landed a job as a finance manager at a car dealership right outside of Miami, Florida. There he gained the confidence and experience that he needed to start thinking about owning his business.

He also learned how to raise capital, and later, was able to raise six figures from his personal savings and investors so that he could buy a franchise.

After doing a lot of research, Chris came to the conclusion that pursuing a franchise with Subway was his best course of action. He says that he likes Subway because it is a universally-recognized brand with stability, and they have the most franchised locations in the world.

After attending Subway’s first phase orientation class, Chris was able to connect with a franchise owner in Georgia who was looking to sell. Chris then used his skills as a finance manager to negotiate a reasonable price, and the rest is history! He says he recorded the whole negotiation over the phone, and will use that to teach others how they too can negotiate business deals.

Chris is very ademate about helping other entrepreneurs from underserved and disadvantaged communities become franchise owners as well. In fact, he is planning to launch a national tour that will teach a course on how to raise capital and pursue franchise and investment opportunities.

Chris comments, “I have created a course to help my fellow entrepreneurs. Raising capital is one of the most challenging parts of entrepreneurship. My course will teach you how I raised $250,000 for my various startups, how I bought my first franchise, and how to become a successful entrepreneur.”

For more details about Chris and his upcoming course, visit www.ChrisWilliamsII.com and look forward to the grand opening of his Subway restaurant in July!