For your evenings out, consider plays, lectures, symposiums, and events at the University of Tennessee Knoxville campus and venues in your back-yard. For years students in the drama and theatre classes at the University of Tennessee Knoxville have presented first-class performances and plays, some by award-winning authors, at Clarence Brown and the Carousel Theatres on UT Campus. East Tennessee communities would be impressed with the vast intellectual, artistic, educational, and entertaining offers at the college for there are many. All of the departments only ask for a reasonable admission, while many events are free. This weekend is your last chance to enjoy: 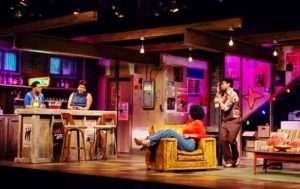 “MOTOWN ’67” has been at the Carousel Theatre since February and will wrap up this weekend at 7:30-9:30 pm, Fri. & Sat, 2-4:30 pm, Sun. Set to the Motown beat in the summer of 1967, when the 12th Street riots erupted after a raid on an unlicensed after-hours bar. The fate of the once-booming blue collar town takes a turn for the worse on five young Detroiters. An Edward M. Kennedy drama prize winner explores an explosive and decisive moment in Detroit – an American city. It is laced with the music of the era with insights into the lives and trials of the musicians.

BENEATH SUSPICION/Letters from George to Evelyn, 7:30-9:30 pm, Thurs. – Sat. March 14-16 at Blount Mansion at 200 Hill Ave. In honor of Women’s History Month. Private Papers of a World War II Bride from 1944 that 1st Lt. George W. Honts wrote to his wife of just 1 year Evelyn, while deployed during World War II. Marble City Opera presents an adaptation of the true story of two abolitionists women – a former slave owner and one of the slaves she freed and educated. The two united to free the minds of their countrymen. These women played on the prevailing gender and racial stereotypes to fight slavery by spying for the Union during the Civil War. Tickets are $15-$30. For more information; MarbleCityOpera.brownpapertickets.com.