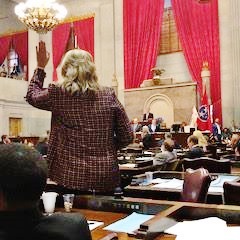 State Rep. Gloria Johnson on behalf of her district was ignored the right to represent her district to offer an ammendment to Bill 77 that denies a woman the choice to abort in the event of incest or rape.

Tennessee Constitution Article II section 27: “Any member of either House of the General Assembly shall have liberty to dissent from and protest against, any act or resolve which he may think is injurious to any individual, and to have the reasons for his dissent entered on the journals.”

(NASHVILLE, TN) The Tennessee House of Representatives voted on House Bill 77 — a ban on abortions after about six weeks, – on Thurs. March 7, 2019. In addition to the fact that this bill mirrors laws that have been ruled unconstitutional in every state where they’ve been enacted, this measure unjustly denies women access to abortions in the most extreme and unfortunate circumstances— rape or incest.

Make no mistake, this legislation is seriously flawed. But in the interest of protecting these victims from being victimized again, I believed it was important to introduce an amendment to provide victims of rape and incest a legal option to terminate a resulting pregnancy.

When it was time for me to introduce my amendment, which had bipartisan support, Speaker Casada called a recess. When the session resumed I stood with my hand raised and was ignored. The majority party’s leadership ignored me standing on the floor of the House (and I promise I’m easy to spot). The debate ended with a breach of protocol. My right to introduce this amendment, represent my constituents, and to speak up for Tennessee’s women was denied.

Having my voice silenced, along with the voices of many Tennesseans who wanted a full and open debate of this policy, left an ugly stain on the House of Representatives.

Every lawmaker has the right to file amendments and to have the merit of those ideas debated. I disagree with my colleagues on the other side of the aisle on plenty of issues, but it is a breach of democracy to reject any representative’s right to voice their opinion, stop them from sharing their values and representing their district.

(I believe) they knew I had an amendment that some of their members would support and even more Tennesseans support. I was shut down, and the only woman to file an amendment on legislation that directly affects women.

Today was a bad day for democracy in Tennessee. You can watch my full comments on what happened on Facebook.

Note: The bill passed the House 65-21. The Senate companion legislation SB1236 will next be heard in the Senate Judiciary Committee, which is comprised of seven Republicans and two Democrats. The committee meets next on Tuesday, March 12, but SB1236 is not currently on the schedule.