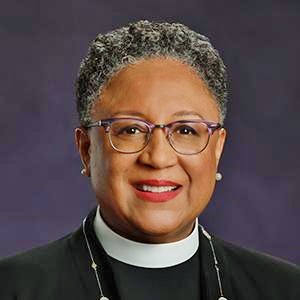 Rev. Phoebe A. Roaf, Bishop elect of the Episcopal Diocese of West Tennessee and 21st century trailblazer to speak in Knoxville.

The Rev. Phoebe A. Roaf, Bishop elect of the Episcopalian Diocese of West Tennessee, will be the guest speaker at a community-wide Celebration of the Life and Work of The Blessed Absalom Jones. The service is scheduled for 5 pm, Sunday, March 3, at the Church of the Good Samaritan, 425 N. Cedar Bluff Road, Knoxville. Music will be provided by Brian Clay, jazz pianist, songwriter, and producer of Jazzspirations, an internet radio show that features inspirational Jazz and Gospel Jazz sprinkled with scripturally-based words of inspiration.

A reception for Rev. Roaf will kick-off the celebration at 10 am-noon on Saturday, March 2, at the Episcopal School of Knoxville at 814 Episcopal School Way. For information and reservations email Michael Moore at mmoore4ube@gmail.com.

Roaf completed her bachelor’s degree at Harvard University and an MPA at Princeton University. She earned a law degree from the University of Arkansas, Little Rock, and clerked two years for Judge James L. Dennis in the U.S. Court of Appeals for the Fifth Circuit, and worked in commercial real estate before heading her call to serve a higher power.

Roaf is a representative of the fourth generation of Episcopalian’s in her family. To also prepare for ministry she attended Virginia Theological Seminary in Alexandria, where she currently serves on the Board of Trustees as Vice-chair.

A 21st-century trailblazer, Rev. Roaf is an appropriate choice as guest speaker for this occasion. The celebration honors Absalom Jones, an early 19th-century, trail-blazing pastor who is known as the first ordained African American priest of the Episcopal Church.

Jones was born a slave in 1746 in Delaware, Maryland who became an abolitionist and clergyman. In 1792 Jones and Richard Allen founded the Free African Society to aid African-Americans and newly freed slaves. Around 1794 Allen went on to establish the African Methodist Episcopal church; while Jones founded St. Thomas African Episcopal Church in Philadelphia, Penn. Jones was ordained in 1802, and was the first African-American Episcopal priest in the United States.

Jones was famous for his oratory and inspired the tradition of anti-slavery sermons. His New Year’s Eve on January 1, 1808, the Constitutional date of freedom, was called “A Thanksgiving Sermon” and was published in a pamphlet. Jones is listed in the Episcopal Calendar of Saints and honored around February 13, the date he died in 1818.

This event is sponsored by the East Tennessee Union of Black Episcopalians (UBE). Childcare will be provided and a light reception with follow the service.