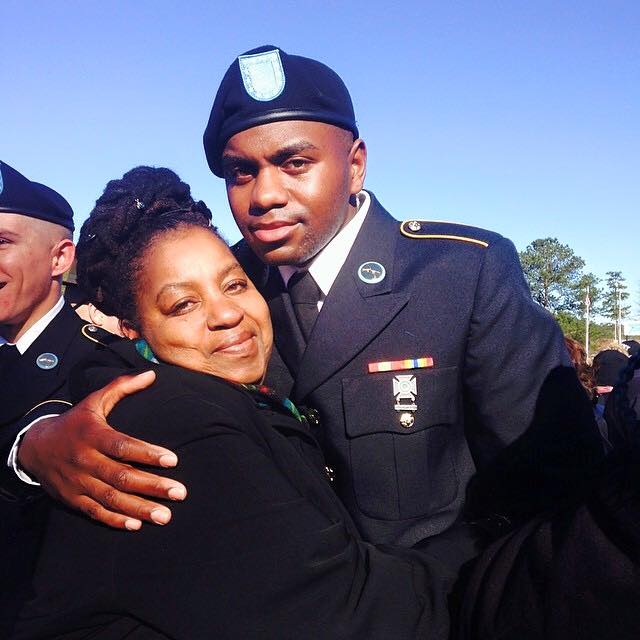 Life doesn't come with a manual, it comes with a mom according to Denzel Grant pictured with his mom Betty Reed who died in September 2018. Grant established "Betty's Purse" charity in his moms honor.

During the holiday’s many families struggled to make ends meet and provide gifts under the tree for their children. Denzel Grant recalls his mom working long hours, and sometimes a second job to provide for her five children.

Grant started “Betty’s Purse” to honor his mom, Betty Reed, who passed away last September. Grant wants to share his mom’s warmth and generosity by blessing a struggling, single-mom headed household with gifts under the Christmas tree.

Over 50 nominations seeking support from Betty’s Purse was received within a few weeks. Grant was moved by the letters he received. After careful evaluation, he narrowed the field to 9, then 3 candidates.

“It was hard, I couldn’t choose,” said Grant. Unable to choose one from the final three, he chose all three families. There were a combined total of nine children that consisted of five boys and 4 girls that were all between the ages of 14 and 6-years old.

The moms made the most of the opportunity. They shopped for clothes and shoes for the children before adding any toys or games.

Grant is the youngest of five children. His older siblings have memories of a two-parent household with a yard and a garage. But Grant’s recollections are of separated parents and boy in Austin Homes projects. Though his mom managed, Grant felt abandoned by the father his older siblings knew.

Growing up in “the Homes” was challenging for Grant. He managed to evade gangs, but not the trauma of gun violence and the gripping hold of drugs. He lost two childhood friends to gun violence. Things seemed “normal” until November 2005 when Theresa Reed, Grant’s 29-year old sister died from a congenital illness.

That’s when grief consumed his mom. The family had suffered the loss of one of its own. There were no offers of counseling, professional help, or guidance to seek emotional support. Betty turned to drugs to cope with the loss of her child, which led to addition.

In the aftermath, Grant was 13 when he was sent to New Jersey to live with his father and his dad’s new family. It didn’t go well and Grant found himself homeless in high school and couch-surfing at the homes of classmates.

At 22-years old and a single father, he walked into an Army recruiting office and joined. He credits his time in the service of his country for setting him on the path of maturity, self-discipline, focus, and patience.

The 4-years of service took a toll on young Grant. He was deployed to Bahrain and Afghanistan within two years. When he returned to civilian life an emotional burden followed him – PTSD that he learned to manage through a combination of healthy living, medications, therapy, and his spirituality.

On his return to Knoxville Grant made a detour to New Jersey. While there he learned to trade currency with Bitcoin and was introduced to FOREX (the Foreign Exchange Market). Grant realized how owning his own business compelled him to work harder. “Hustle builds character, business builds credibility. Know the difference, respect them both,” said Grant.

After settling in Knoxville, about 2-years ago, Grant became a Knox County Sheriff’s Dept. Special Operations Officer for a brief stint. The experience of being on the other side of gun violence compelled him to advocate for victims and their families.

“It’s a subject that needs to be talked about,” Grant stated. “There is no magic formula to end gun violence, but through community participation hopefully the number of victims can be reduced.”

Grant is 27 now and developing a non-profit – Men On A Mission (MOAM) that targets young men ages 10 through 24. “They deserve better, can do better, and do not have to take to the streets or a life of crime. These young men need to be taught how to be men.”

“There are choices that will not land you in jail or dead.” He has a brother who is doing 20 years in the penitentiary. With the help of community and resources, Grant hopes to steer boys and young men to a realistic view of life and arm them with the tools and resources to cope.

The vision of MOAM is “to have every young man understand that the strength of a man is in his character and not always in what he does. A strong man is a man of wisdom who understands his top priority is to his family and community.”

Grant is hoping to work with and not duplicate established organizations. He wants to address areas that are overlooked such as mother and son events, and support for young fathers that includes classes on self-care, caring for their sons and daughters, and resources to help navigate the child support and justice systems.

Grant welcomes volunteers of time, resources and investments of every kind as he prepares to launch Men-on-a-Mission and to continue and expand Betty’s Purse to include a celebration of single-moms on Mother’s Day. Both can be followed on Facebook and Instagram where donations can be made.