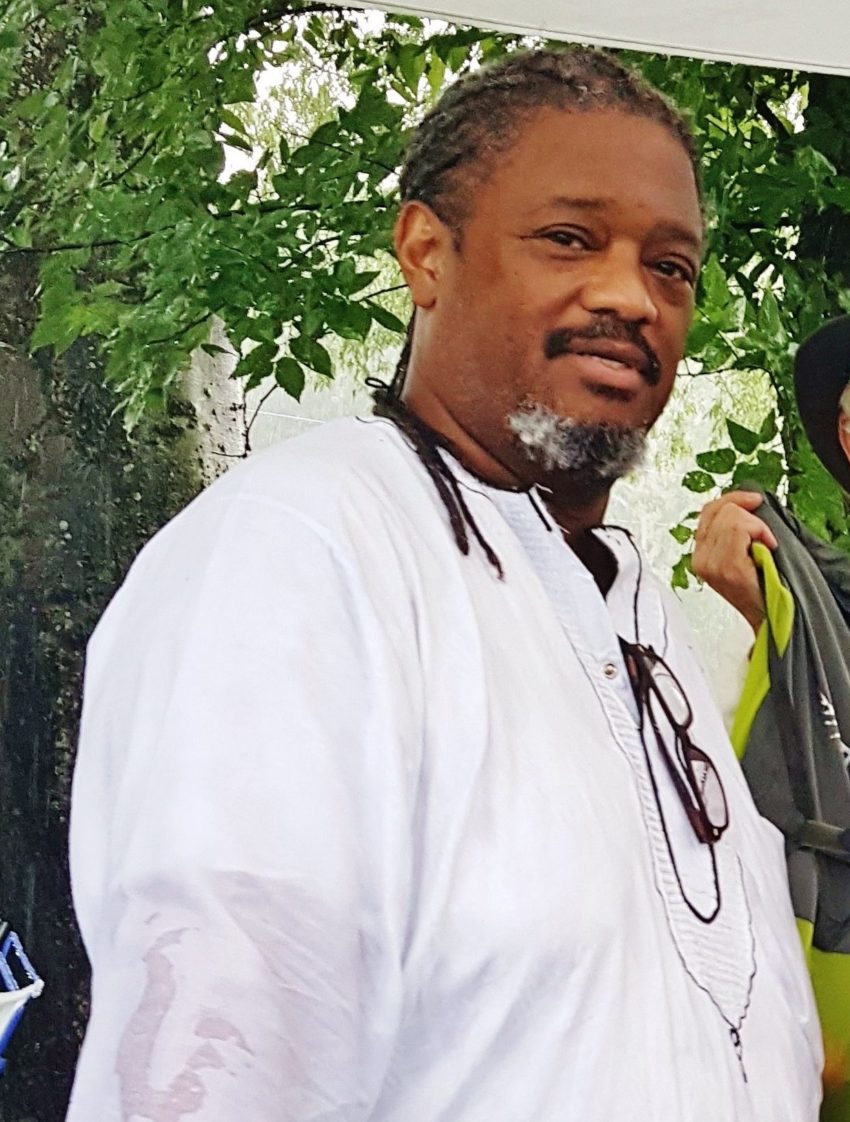 Chris Battle, Pastor of Tabernacle Bapt. Church with an umbrella he used to escort Eastside Sunday Market shoppers to their cars on a rainy Sunday afternoon last June.

(REVISED1/28) National health trends emphasize the need for improved healthy living habits through diet and exercise. Medical professionals encourage activity and consuming more fresh fruits and vegetables. However, many communities do not have easy access to recreation or healthy food options.

These areas are classified as “food deserts” and “food apartheid” due to disparities most often found in urban low-income neighborhoods and communities where most of the residents don’t have transportation or access to healthier options.

Residents in these areas are forced to choose fast food and unhealthy and expensive options such as the corner convenience mart and are also more likely to suffer from high rates of obesity, cardiovascular disease, and diabetes.

Chris Battle, Pastor of Tabernacle Baptist Church, 2137 Martin Luther King Ave, recognized the fresh food inequity in East Knoxville and is taking steps to improve and to help eliminate this disparity by developing a fresh food farm in the inner-city.

It’s important to know where your food comes from, and many people look for locally grown produce. Much of the produce available in chain grocery stores are likely to have been imported from great distances and poses the likely hood of being picked too early to have developed most of its natural nutrients.

The future site of BattleField Farm is a 2-acre plot of land located at 1400 Washington Avenue next to the old Standard Knitting Mills building in Northeast Knoxville near downtown. The property was previously occupied by Abbey Field Farm for about five years.

“I’m not a farming expert but I’m not new to farming,” said Battle. ”But I have a ‘green thumb’ I got from my grandfather.” Battle credits his grandfather for his love of planting and watching things grow. Growing up in Cincinnati, Ohio at a young age he would follow behind his grandfather watching him work in the family garden. Many years later, after returning home from college, Battle’s father recognized the love and enjoyment he had for gardening and gave him his own plot of land to work.

“By that time my grandmother was in her 90’s and she loved watching me garden. I would carry her outside with me and sit her where she could watch me work.

“I’m somewhat ‘exfrighted’ about the challenges the farm presents,” said Pastor Battle. His word derived from; “excited” about the prospects and positive effects and benefits to the community, and “frightened” because he doesn’t yet know everything he needs to know about the project. He is confident that he is up to the task and welcomes the advice and recommendations from those who have the know-how.

Pastor Battle is busy reading up on farming as well as attending seminars and conferences that will benefit him. He wants to turn his heritage and passion for planting and watching things grow into a mission that will improve and promote healthy eating while building social connections.

Pastor Battle’s most recent farming experience was last spring when he organized a community garden on adjacent property of Tabernacle Church. The garden was divided into 16 plots, each 10’ x 17’ in sizes that were maintained by a diverse group of people from the church, community, a youth group, and a fraternity all of different cultural and religious backgrounds. Although the main goal of the garden was to produce fresh, organically grown vegetables, there were many unforeseen benefits.

Some of the examples of sharing include the Gleaning Fence Pastor Battle instituted from scripture reference in the book of Ruth. He planted seeds along the perimeter of the fence that enclosed the garden. As a result, food also grew outside of the fence for anyone in need to harvest.

Occasionally, someone would come by and ask for certain vegetables if they did not see them available on the outside of the garden. Pastor Battle told them to wait, and he would get it for them when available. He placed a basket on the fence to fill some of those requests. Then other members of the garden started sharing their excess in the basket.

The closing of Abbey Field Farm gave Pastor Battle the opportunity to develop an urban farm. He became aware of Abbey Field Farm’s closing through his association with them as vendors at the Eastside Sunday Market on the grounds of Tabernacle Church in partnership with Women in Urban Agriculture, Knox County Health Dept., and SEEED, Five-Points-Up, and Nourish Knoxville.

Pastor Battle’s long-range plans include planting a few fruit trees, an outdoor space for people to lunch at the farm, holding classes on farming what-when-and-how to; as well as classes on canning, and at some point perhaps even adding chickens and bees, and an occasional musical concert.

There are many advantages of having access to locally grown produce.

(1) Home-grown vegetables retain more of their nutrients.  A study done at Montclair State University in New Jersey comparing broccoli grown in-season with broccoli imported out of season found the latter had only half the vitamin C.

(2) Home-grown vegetables are safer. It ripens naturally on the vine while foods brought in from long distances are artificially “ripened” with ethylene gas. The further the point of origin to the point of sale increases the likelihood of produce picked unripe and before maturity.

(3) Locally grown is considered to be less than 100 miles, yet most produce has been imported an average of 1,500 miles, according to the Leopold Center for Sustainable Agriculture at Iowa State University.

BattleField Farm is set to open this spring and will be maintained by volunteers. Pastor Battle is also in need of a farm manager. A Go-Fund-Me page has been set up at gofundme.com/battlefield-farm-amp-gardens to help defray the initial costs of equipment, tools, seeds, and a much-needed facelift to the property. The high hoop tunnel greenhouse is in desperate need of repair and is the only remaining structure on the site. You can click on the above link to contribute and to learn more.

Your support of BattleField Farm will help to provide nutritious, home-grown organic foods to area residents at an affordable price. Pastor Battle is also seeking any available grant funding.

Battles plans for the farm also include soliciting contracts to supply fresh vegetables to restaurants and food trucks.  For additional information on Battle Field Farms, Pastor Chris Battle can be reached by e-mail at battlesfieldfarm@gmail.com or by phone at 865-214-7870.