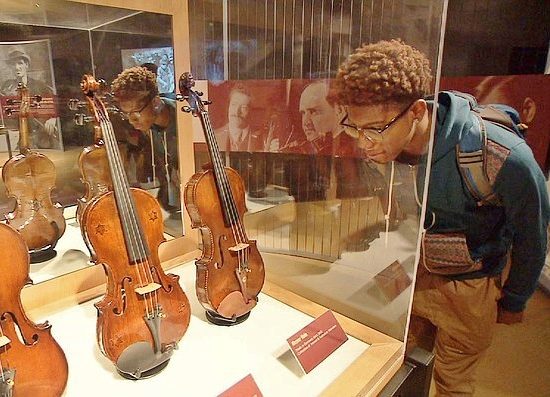 The “Violins of Hope: Strings of the Holocaust” exhibition will be on display at the UT-Knoxville Downtown Gallery for January 4th First Friday through Jan. 27th. (Photos submitted)

(KNOXVILLE, TN)  Violins that were played by Jewish musicians during the Holocaust will again sound in Knoxville under the accompaniment of the Knoxville Symphony Orchestra. These life-changing performances are set for January 23 and 24, 2019.

Hallerin Hilton Hill will add commentary and true dramatic readings of these 50 violins that come from Israel. Each violin has a historic, true story of the Jewish musician or family member who rendered music for the Nazis and those being marched to the death chambers and gives voice to those who perished in the Holocaust.

The collection was assembled and restored by Israeli master violin maker and restorer, Amnon Weinstein. A Holocaust survivor brought Amnon a violin for restoration and shared the history of the violin. This man survived the Holocaust because his job was to play the violin while Nazi soldiers marched others to their deaths.

When Amnon opened the violin’s case, he saw ashes. He thought of his own relatives who had perished and was overwhelmed. Amnon put out a call for violins from the Holocaust that he would restore in hopes that the instruments would sound again. This was nearly 50 years ago.

Educators are encouraged to schedule a field trip to the University of Tennessee Downtown Gallery to view the exhibit, or to attend the “Violins of Hope” performances with the Knoxville Symphony Orchestra. The “Violins of Hope: Strings of the Holocaust” exhibition will be on display at the University of Tennessee Downtown Gallery at 106 South Gay Street from January 4 – 27, 2019, and will be part of the “January 4th First Friday” art district event.

Throughout the month of January 2019, Avshi Weinstein, a Violins of Hope co-founder and educator, will tour East Tennessee middle and high schools as well as churches, synagogues, Sunday schools, businesses, recreation and senior centers with musicians and the Violins of Hope.

Miriam Esther Wilhelm, Head of the Stanford Eisenberg Knoxville Jewish Day School that is spearheading the project, considers the program a monumental experience for the Greater Knoxville and East Tennessee community. Sponsorships are available at a variety of levels. For information on sponsorships, contact Rabbi Yossi at 865-300-8012 or Jenny Wood at 865-242-0202.

All proceeds benefit the Stanford Eisenberg Knoxville Jewish Day School. Tickets can be purchased online at tennesseetheatre.com, and at violinsofhopeknox.com/