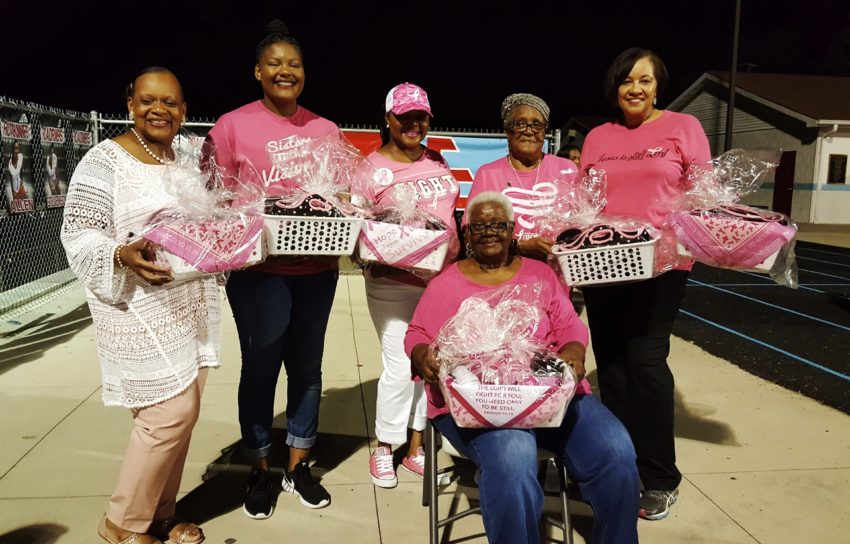 Move over Mother Nature, a new hue has been added to the fall color palette. Pink is being prominently displayed amongst the fall colors that blanket East Tennessee.

During the month of October pink is being worn around town, on the field, and by fans at sporting events. “Pink-tober” is breast cancer awareness and prevention month.

Members of Austin-East Student Government Assoc. recognized 7 local breast cancer survivors during half-time at the recent A-E/Gatt-Pitt football game in an effort to encourage monthly self-exams, check-ups, and annual mammograms. Attending fans were encouraged to wear pink to honor the many women, and men, who have faced breast cancer. These women came forward to share their story and encourage others.

Alice Allen who is celebrating 8-years healed of malignant breast cancer and a brain lesion. Allen retired in 2010, from a Federal civil service position. After her victory over cancer, she returned to the workforce and is SNAP Coordinator for the Office on Aging. A-E student and SGA representative Elise Allen escorted her aunt;

Vrondelia “Ronni” Chandler was escorted by her niece and SGA member Jaiva Chandler. Ronni is a 6-year breast cancer survivor and A-E Class of 1976 alum. She has guided the reins of Project GRAD Knoxville as Executive Director and CEO since its inception in 2001. She encourages others through her book “Light from a Candle: Hope for the Broken Believer in a Time of Devastation;”

Deborah Chesney, an 8-year survivor was unable to attend. Her SGA escort and great-niece Asia Chesney was present on her behalf. Deborah is the mother of a daughter and 2 sons who have given her 3 grand-daughters and a grandson;

Melissa Ewing is currently battling breast cancer that was diagnosed and treated in 2014 but returned a year later. Her goal is to defeat cancer and become an advocate of prevention for others. Her SGA escort was India Henry;

Geraldine LeGrande is a 14-year survivor. She was escorted by SGA member Selena Hernandez.

Bonnie Solomon, nor her physician, had any suspicions when she was sent for her first routine mammogram. A pea-sized culprit was detected. Her early diagnosis has resulted in a 19-year victory over breast cancer. Kyla Bourne was her SGA escort.

Keelah Thompson was diagnosed in 2010. She was to be escorted by her daughter and SGA member Joy Griffin but neither were present. After 6-years in remission, cancer reemerged in 2016 and Keelah resumed treatments that are currently ongoing. Keelah, her family and loved ones are currently in the heat of a battle for her life and was unable to attend.