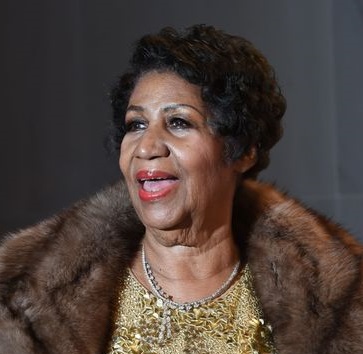 Aretha Franklin on the red carpet at the Kennedy Center Honors hosted by then Pres. Barack and Mrs. Obama in 2015. (Photo by MOLLY RILEY, AFP/Getty Images)

(KNOXVILLE, TN) The Queen of Soul, the beloved Aretha Franklin, died at her home in Detroit on Aug. 16th after a lengthy battle with pancreatic cancer. In Detroit, four days of events will honor Franklin this week, with three days of public visitations around the city and a tribute concert prior to the funeral service on Friday, Aug. 31, only open to special guests, close family, and friends.

Franklin’s body will lie in repose for public viewing at the Charles H. Wright Museum for African American History for two days, Tuesday and Wednesday, Aug. 28-29, from 9 am to 9 pm; and at New Bethel Baptist Church from 10 am to 4 pm on Thursday, Aug. 30.

Franklin’s fans in Knoxville are invited to sign the late Aretha Franklin’s Knoxville Guestbook. Beal Bourne of Jarnigan & Son Mortuary created the book to acknowledge Franklin’s area fans. The book will be sent to the funeral director in Detroit and delivered to the Franklin family. The book can be signed through Friday evening, Aug. 31 at Jarnigan & Son Mortuary, 2823 Martin Luther King Jr Ave., across from Austin-East High School. The office is open 9 am to 7 pm Monday through Saturday.

Bourne has created a printed collage of photos of Franklin to give to signers of the guest book. The collage portrays Franklin from the early years of her career to her final days. A copy of the collage will accompany the guest book to Detroit.

Sending a guest book signed by area fans has become a tradition at Jarnigan, the oldest continually African-American operated business in Knoxville. Having built professional and friendship relationships with morticians around the world, Beal and his wife Peggy Bourne have amassed programs from the homegoing services of such legends as Michael Jackson, Whitney Houston, Winnie Madikixela Mandela, and Maya Angelou, to name a few.

Beal was honored to personally meet and chauffeur Aretha Franklin both of the times she was in Knoxville. He was asked at a time when no commercial limo service in the area would accommodate the Queen of Soul. Not only did Beal provide the limo, but he also drove it.

A musical tribute for the undisputed Queen of Soul will occur Thursday evening at Chene Park in Detroit. Free tickets are available through Ticketmaster (guests are limited to two tickets). Performers and details are still being added.