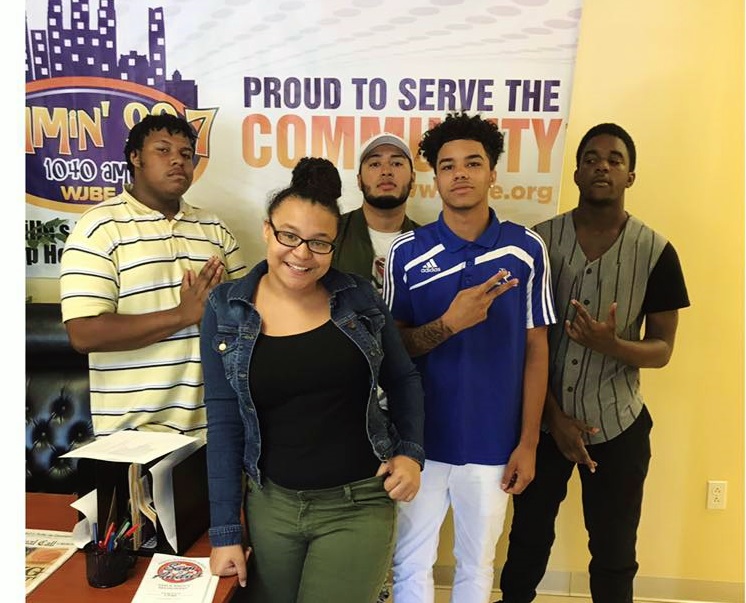 By Chuck Williams (KNOXVILLE, TN) “The Mouth” is back on the airwaves for a second season. The show airs from 1-2p.m., summer Mondays on radio station WJBE 99.7fm/1040am. The show is conducted by five students that have participated in the Audio Production class of Charles Lewis at Austin-East High School. The returning cast mates and their on-air persona name are Jaiva ‘with Da Flava’ Chandler, Isiah ‘Big Pookie’ Sheadrick.D’Andre ‘Dreso’ Thaxton is new this summer. He replaced Marcus Campbell who graduated last year and is attending Pellissippi State. Campbell also returned as an employee of WJBE as an Assistant Producer of The Mouth. Sway Rosales and Bishop Tolbert were also 2017 participants. The idea for the show was suggested to Charles ‘Chuck’ Williams, News and Sports Producer at WJBE radio station by a friend. Clyde Anderson, an Event Planner, insisted that I ‘check out’ the Audio Production Program at A-E. I finally relented and visited the class and was equally amazed by the program. I realized that these students had a hunger to learn more. At that time the 2017 August elections were on the horizon and plans were in the works to add a show to cover the candidates. Williams could feel the fire lit by Anderson. I wanted to produce a show hosted by students from the class that would research and interview candidates as well as current political leaders. I made the pitch to my boss Joe Armstrong, WJBE CEO and Founder who was instantly onboard. And the rest is history. As I worked with the students, I could see that Mr. Lewis was training them well; they were intelligent, energetic, and full of ideas. The first production meeting covered station policy, dress code, professional behavior; and naming the show, theme music, and talking points. Those tasks were completed after 30-minutes of brainstorming. Then it was time to do the work before going on-air. Their first assignment was to research the candidate and the position being sought, the District 1 City Council seat. The second half of the show is an open discussion for the students to discuss their chosen topics with one exception; that their opinions be factual and knowledgeable. The first show was a smash hit, and The Mouth was here to stay. Many opportunities for the students have evolved. They have co-produced the Chris Blue concert at Midway Park, A-E Day and WJBE Day at Tennessee Valley Fair. Rosales covered Carson-Newman football games, and co-hosted A-E games with sportscaster Charles Frazier. The Mouth was invited to guest host Bill Lundy’s ‘The Open Dialogue’ show on Community Television last summer. The sky is the limit for these students. A GoFundMe account has been established with hope of compensating the students with a small stipend, and to purchase equipment that will enable The Mouth to broadcast live from school and remote locations and events. Chuck Williams is the Creator and Executive Producer of The Mouth. His on-air persona is Big Daddy Old Skool.