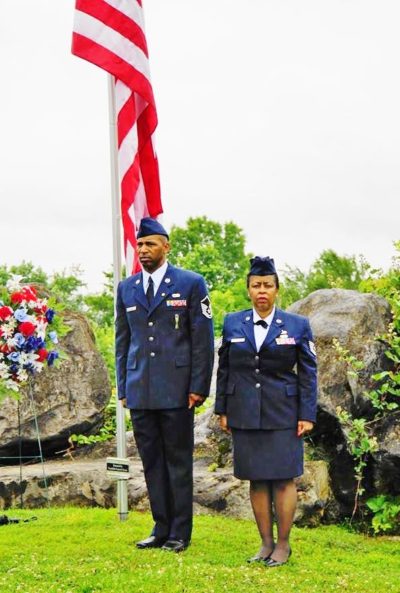 Honored Air Force veterans Master Sgt. Michael Buchanan with 25-years; and Tech Sgt. Renee Sudderth with 33-year of service participated in the raising of the flag at the Memorial Day service in Alcoa, Tn.

(ALCOA, TN) The “5th Annual Memorial Decoration Day Celebration” was Monday morning at Cedar Lawn Cemetery. About 100 citizens were there to honor black veterans and their families. Attendance was deterred by drizzling rain. The event has attracted over 300 participants in prior years.

The celebration of black veterans began promptly at noon with Blount County veterans raised the flag during a 21-gun salute and bugle taps performed by members of the volunteer East Tennessee Honor Guard under the direction of Reid Gephardt.

“We are glad to have a female veteran participate in the raising of the flag service for the first time,” said Dan

Retired Tech. Sgt. Renee Sudderth said she was honored to participate in the ceremony. Sudderth graduated from Alcoa High School, and State Technical (Pellissippi State) College in Knoxville. She retired from the United States Air Force in 2016 with 33-years of service. During her career, she served in many capacities and earned many honors. After 10-years of active duty, she transferred to the Air Force Reserves. That stint was brief. She was reactivated after the Sept. 11, 2001, attack on the Twin Towers in New York City adding three more years of active duty, then returned to the Reserves before retiring. She currently resides in Georgia.

Four members of the Sudderth family have in combination served 48-years of military service (and counting). Her brother Terry served 7-years in the Marine Corps. Her father, 84-year old, Walter Sudderth served in the Army alongside Elvis Pressley (deceased) who became a famous Rock and Roll performer.

Currently Renee’s niece, Staff Sgt. Ashley Sudderth is serving in the Korean Demilitarized Zone; a military hot-spot. She has been in the Air Force for 6-years, in the medical field. (The president of the United States is currently in crucial negotiations with the Presidents of both North and South Korea.)

Alcoa from Atlanta transplant Brenda Townsend-Williams and Knoxville native Robert Minter co-mastered the ceremony. Minter is a U.S. Army veteran that earned the prestigious Unit Valor Award, Viet Nam Service Medal, and two Bronze Stars, and others. Minter provides an annual scholarship to an Austin-East High School student-athlete; and continues to serve the community with his professional experiences.

“Love is measured by what it does,” said Buchanan. He referenced scripture from Galatians ch 5:13 to parallel spiritual liberty given by God to the world, with those given by man. He emphasized that both required sacrifice and neither should be taken for granted.

Other Blount County veterans recognized were: Chester Brabson a retired Master Sergeant U.S. Army, 25-1/2-years. His tour included Germany, Korea, Japan and Viet Nam; Melvin Love U.S. Navy retired. Love said he sailed around the world at least three times. He credits the military for making a positive change in his life and making him a better man.

To that veteran, Dan McCord proclaimed, “every man should be required to serve in the military and get married. If that doesn’t make a man out of you – nothing will.”

The celebration culminated in fellowship over a complimentary meal which is a memorial tradition in black communities. The sponsors were and The Beloved Community Outreach Foundation Inc. and Foothills Funeral Home.